New smart appliances are constantly being released and connected to the internet and to each other. The Samsung smart fridge is becoming even smarter. They just announced at CES 2018 that they were adding voice commands to their Family Hub line of fridges.

Samsung’s Family Hub smart fridge was originally released back in 2016 with a large touchscreen built into one of the doors. It basically functioned like a giant smartphone or tablet that could show calendars, photos, notes, and recipes. Now that Samsung has announced that they will now have voice commands built into the fridge’s operating system, you won’t even have to touch the screen while your hands are occupied cooking.

Samsung’s voice assistant Bixby will allow you to connect the rest of your smart devices to your refrigerator through Samsung’s SmartThings home network making it the hub of your smart home. You’ll be able to ask Bixby to turn your smart Hue lights on and off in your home. It will pull up your connected security camera footage, and send messages from your Samsung fridge.

Who would have thought that we would be talking to our fridges? Let alone have them talk back to us! What’s next a toaster with AI? Or maybe a sentient toilet?  We are getting closer and closer to realizing the home we saw conceptualized in Disney’s Smart House movie. I just really don’t need a crazy hologram locking me in my house. But I am all for talking to my fridge, watching Netflix on it when I’m cooking dinner, and looking in my fridge without opening the doors. 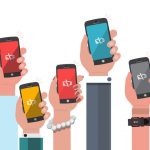